As most of you know I am single. This paired with motherhood has numerous challenges. How do I date while protecting my children? Where do I find someone to date? Where do I find the time to date? Now let’s park those issues to one side and deal with the real problem. The men!

This post is not going to be complimentary to the opposite sex. So I apologise to my three male readers but I am sick to death of men. I am going to illustrate my point with a scenario that occurred over the weekend.

I get a random message request. A guy who saw me recently from afar thought to text and ask me out. Now credit where credit is due. Not only was that brave but it was romantic and exciting. Of course I was flattered and proceeded to chat to see if a drink was something I’d be interested in pursuing.

Turns out he was a normal attractive funny guy with a cheeky sense of humour. We had great textual chemistry…. See what I did there. We text on Sunday and the initial scenario was that he would like to cook for me. I thought wow a real man willing to put in a bit of effort. I declined because I wouldn’t have a date in the house with the kids. So then it went to a meal and drinks. That was just as good. The flirting was peak and I giggled the weekend away.

Then there was a switch. I’m not sure what happened and I refuse to blame myself but the meal got dropped and it was just drinks. Then a text came to say he was going casual so to give me the heads up not to go full hog. Then it was sure will I just call over when the kids are settled.

Well that was it my back was up. I had indicated to the boy (demoted due to immature behaviour) that I had a fiery temperament but I had not expected to display it so quickly. I told him I couldn’t keep up that he kept changing his mind. Then the usual sermon came….I’m not looking for romance or anything serious I’m just looking for fun. Well hose me down lather rinse and repeat because I’m a woman of course my immediate thought was marriage. The first thing I thought when you text me was how will I pin this guy down?

So the following correspondence pretty much put the nail in the coffin of our relationship. I text. ‘I think what you are looking for is a whorehouse.’ It wasn’t taken too kindly to. I relented and said sure call up and we will chat and I was…. I think you call it ghosted…. That’s where you get ignored completely.

Now I wish that I could tell you that this incident was unique or isolated. Sadly it’s not. In the interests of fairness I have no idea what that guy is going through in his life and he’s probably lovely but this one was the straw that broke the camels back.

I’m sick of organising a baby sitter to have to suffer the humiliation of telling her that my date has let me down that she is no longer required. I’m sick of blokes thinking that they have to put in no effort and still expect sex. Just because you don’t want a relationship doesn’t mean you shouldn’t at least still have respect. 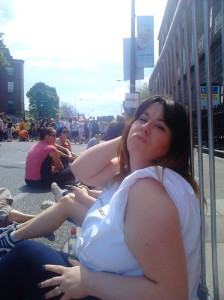 I remember getting the shift when I was a teen. After you’d wonder were you gonna meet again. It was exciting and nerve wrecking and sometimes crushing. But if before that guy kissed me he had said …… Just to let you know I only want this kiss and that’s it ….. Well sure I wouldn’t have kissed him at all.

Not all women want a serious relationship but what we do want is respect. It wouldn’t hurt to put in a bit of effort. Being taken out, getting to dressed up and making an effort adds to the build up of eventually getting what we both want. Make no mistake I love sex. What I don’t enjoy is it being made clear that that’s all is required of me. Then my dear what you are looking for is a prostitute. If I were one sweet cheeks …. You couldn’t afford me!

I am slowly resigning myself to the fact that I am going to spend a long time alone maybe it will always be the way. I just don’t understand the modern way. Sometimes I think if you can’t beat them join them but I feel deep down its not for me. I’m a traditional girl. I like to have a relationship. I enjoy being a part of a couple and the last time I checked it was fun!! That being said I’m not opposed to short flings. That’s fun too.

So to wrap up the incident. I was fuming at being ignored. There is nothing worse to me. So I was trying not to turn 100% psycho. For my own closure I needed to say something. So I returned the pic of his dick he sent me. Said… Here you can have this back and a bit of manners wouldn’t go astray.

6 thoughts on “Not a Whorehouse”