So in case I have failed to mention it, I have three children. The Sun, The Moon and The Stars. Also in the very likely event that the smaller details of my life have escaped your memory I am also a single parent.Taking those statistics into account most battles are three against one. Like the phrase I’m sure you have all seen on Facebook

My house is ruled by a small army,

that i have created myself .

I always attempt at starting the day off with a cup of positivity. Ok it’s coke…. but I drink it in a positive manner. And gradually as the day goes on those three little scoundrels make it their sole mission to beat the positivity out of me one defiant act at a time.

For a long time I have found bedtime to be the worst part of my day. I actually have a theory. Children should be put to bed in the morning when parents have the energy, patience and self restraint to deal with the battle. I chose the word battle carefully because that is exactly what it is. A full scale armor wearing, combat ready, load your cannon, kill the opposition and show no mercy battle. For a long time the children were winning. I would regularly be reduced to actual tears while my two boys would jump on their beds taunting me. 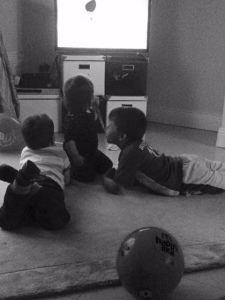 A major part of that battle was the nightly brushing of the teeth.In total disbelief at the antics that were going on one night, I removed the brush from his tightly pursed lips and really expected to see razor blades. There was no other plausable explanation for the pain my son was claiming to be in while his teeth got brushed. It became so bad that yes…. I just stopped bothering. I was getting so frustrated and that was escalating their behavior and for my own sanity I just gave the aul oral hygiene a vacation.

Randomly and typical of me I mentioned this nightly trauma to a friend of mine who gave me a bit of advice. He said to get toothpaste and toothbrushes and put them under their pillow and tell them they are from the toothfairy and see if that helps. Well Holy God I thought this was an ingenious plan. I had never heard of anyone doing this before and I was willing to try anything at this stage. 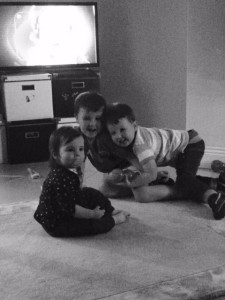 I had often told the boys that if they didn’t mind their teeth that the tooth fairy wouldn’t take them. This seemed to utterly confuse them. In reality it wouldn’t be hard to be confused. Kyle’s rational brain told him that if he didn’t brush his teeth that they would fall out quicker and as a result he would get money to spend. You cannot argue will the logic. I force fed him the notion that it’s all well and good to have them fall out but if they are black you would get nothing from the toothfairy. I really did think that manipulating children would be easier!!!!

So the night had arrived. With stealth only a ninja could identify with I crept into their rooms and placed a new tooth brush under each pillow. It felt a little bit like Christmas. I am utterly horrified at the things that excite me these days. Tooth brushes for the love of all that is holy. Well the little screams of delight the next morning were heart warming and extremely unwelcome….. it’s only 7:10 am can you keep it bleedin down!. They were thrilled and we all had to shuffle into the bathroom and brush with our new magical brushes. 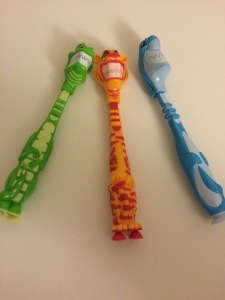 I’m not saying that the protests have stopped or that they brush their teeth as much as I would like but a little bit of imagination goes a long way. Not only did that advice make bed times a little bit easier but I have created a memory. The night the toothfairy brought my children new toothbrushes is one i’ll never forget.